The Appearance of the Risen Christ to the Apostles

It's been three days since Friday when the Jews crucified Christ on Golgotha. The two disciples, Joseph and Nicodemus, placed Him in the tomb. They sealed His tomb with a large stone. What about the other disciples of Christ? Where could they be? They are all together in a house with a heavy heart from grief, but also with the doors closed, well secured, because they are afraid. The enemies of Christ may come to arrest them. In one night they arrested their beloved Master and so unjustly dragged him to the courts, they slandered him, they sentenced him as a criminal to death on a cross ... So, how can they not be afraid now? Their own lives may also be in danger.
From time to time the scribes and Pharisees may seek them out, they may lead them to their death. Some pious women, Christ’s followers, just before they came and surprised them. They went early in the morning to offer with all their love - the most exquisite myrrh to their dead Master, but they found the tomb empty! And not just that but one Angel said to them that Christ is risen! And the most shocking, as they were returning, Christ Himself met them resurrected! "We saw him with our own eyes, he greeted us, he spoke to us", the Myrrh-bearers said happily.
The disciples, however, could not believe them. But is it possible? They were convinced that Christ died on the cross. They knew that they had put him in the tomb and the tomb was closed with a large stone. What are these now that the claim? Probably because of their pain and their great love for the Master, they imagined everything that was being said. This is what the disciples thought. 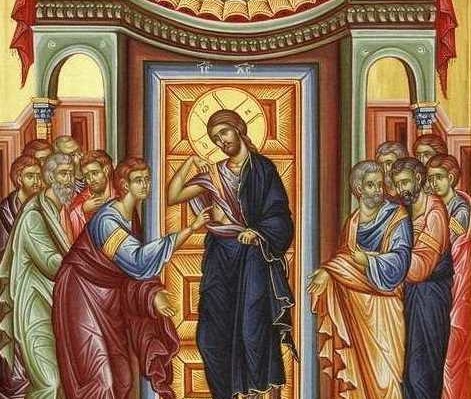 Βut when they were all gathered together, and though the doors were closed, suddenly Christ appeared among them! "Peace be upon you"! Ηe greeted them with the well-known greeting exchanged by the Jews at that time. They were frightened just as they saw Him. They were scared. Do they see a ghost? Is it a dream? But no! It is true! They can hear His sweet divine voice: “Why are you troubled? Why do you have doubts within you? Look at my hands and my feet to make sure that I really am. Come and touch me. The ghost has no flesh and bones, as you can see I have”. And saying this, he showed them the marks of the nails which he had in his hands and on his feet. He also showed them His side, which had been pierced by the soldier's spear on the cross.
The disciples looked and wondered. How can they believe in this unexpected joy, that Christ was resurrected? But also, how can they continue to doubt? They can see Him with their own eyes, they can hear Him, they can touch Him! "Do you have something for me to eat?" Christ asked them, wanting to give them further proof of His resurrection. They immediately brought him grilled fish and honeycomb with honey. Christ took them and ate before them. They slowly realized the great truth, that he is alive! When he had soon disappeared from amongst them, the bones of the fish and the wax of the honeycomb were left behind. Thus no one could say: "Did we have a dream? Did we imagine that?"
From the company of the disciples, however, Thomas had missed out. When he returned, the other disciples said to him happily, "We have seen the Lord!" But he could not believe them. "If I do not see in His hands the marks from the nails," he said, "and if I do not put my finger in the marks from the nails, and if I do not put my hand on His side, I will not believe."
Exactly one week later, the disciples had gathered in the same place. This time they had Thomas with them. Jesus appeared – while the doors were closed once again - and He stood among them. "Peace be upon you", he greeted them and turned to Thomas: - “Come, Thomas, bring your finger here and see my hands, bring your palm and put it on my side, so that you are not a nonbeliever but a believer. Thomas was shocked. “My Lord and my God!” he exclaimed with great faith. The Lord heard all that Thomas had said and now came to assure him with convincing proof of His resurrection. Yes, Thomas can no longer be a nonbeliever. He is now certain that Christ has risen! And he is also sure that after Christ was resurrected, after he conquered death, he could not be a simple man; he is God himself!
This is why the resurrection of Christ is the greatest event in history and the most glorious celebration of our Church. Because it assures us that our Christ is not only a man, but the true God and the victor of death. What grief henceforth can steal our joy? Our greatest enemy, death, was defeated! Christ was resurrected and one day he will resurrect us all, so that we can live eternally close to Him in the joy of paradise! That is why the faithful never cease chanting:

"Christ is risen from the dead,
by His death He trampled upon death,
and to those in the tombs He granted life".